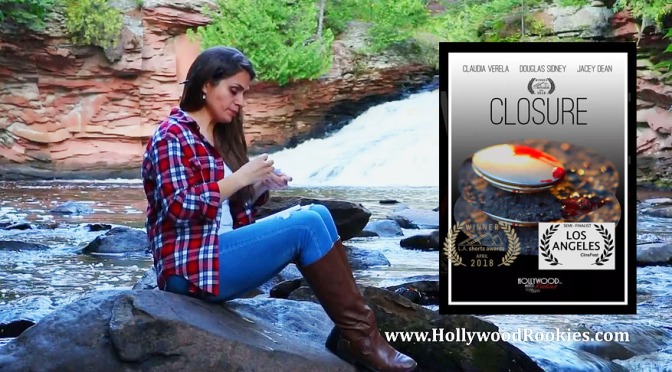 Jacey Dean, a determined multi-talented actress, writer, and director, is getting closure with her latest film by the same name.  Closure is a multi-award winning short film drama with a serious storyline.

“An unwanted victim of rape attempts to move beyond her lifelong secret, only to find that the past catches up with you” (IMDb).

Closure, Dean’s latest work, is built upon an acting and directing foundation of other films, including Solatium (2017) and Call Me Luke (2015).  Earlier works include The Son From The North, Hollywood Rookies Trailer (Episodes 1, 2, 3). She is also a Mezzo-Soprano vocalist, as noted in her 2013 recording, Bendiciones.

Artimusi. Was there something special about this film that you wanted to convey?
Jacey. The driving force behind this short film was my personal awareness of several true-life stories that parallel the story.

Artimusi. IMDb lists 12 actors, but who are the main players?
Jacey. We were fortunate to have Douglas Sidney accept the role of leading antagonist, and he did an excellent job. During the course of a single shoot day, Doug played two versions of his character that spanned a 28-year age gap. The difference is so convincing, multiple viewers asked me if it was the same actor! Another mission-critical performance was given by spokesmodel Claudia Verela, who portrayed an assault victim.

Artimusi. What was the making of the movie like?
Jacey.

The most challenging part of this production was putting together the cast and crew; having spent most of the past dozen years in Los Angeles, I had very few connections to people in the arts here in the Northland. God really pulled this project together.

Artimusi. Without explaining everything or revealing the ending, describe the main character and plot.
Jacey. The most I can say is that the story centers around a young university professor, Jacinda Ramirez, who struggles to deal with a sexual assault tainting her history.

Artimusi. What was the key, climactic moment, or something especially interesting about the film?
Jacey. I would have to say the ending; both in pre-production reads of the script and comments after seeing the film, many people said they never saw the end coming.

Artimusi. Is the film primarily along mature themes (sex, language, etc.) Comedy, funny moments? Violence? What is the expected rating?
Jacey. This film is definitely for adults. While most of my works in progress are family friendly or even kid-centric, this film veers strongly from that norm. It’s a drama, with some true-to-life violence (assault) and is rated Mature, produced for both men and women, but primarily women.

Artimusi. Are there any credits or attributions you’d care to make.
Jacey. I really appreciate the local businesses, talent and contacts who came together to make this film a reality. From actors driving 3 hours to an early morning shoot, to a local business employee giving up his Saturday off to come stunt drive a semi-truck, this project represents the effort of many individuals.

Artimusi. Do you have anything further to add?
Jacey. As it says in the ending credits, Closure is dedicated to victims of sexual assault who are unable to tell their own stories. I pray it does some good.

“Dean trained in the Meisner method of acting at the Joanne Baron/DW Brown Studio in Santa Monica, CA. She also studied Accounting at the University of California Los Angeles – Extension. She currently resides and films in the Northwoods of Wisconsin.” FilmFreeway

Congratulations to Jacey Dean. With Closure already a successsful short, it seems well on its way toward a promising feature film.